Under a Brass Moon

For another Roscoe Gordon story see:

"Calliope" in Under a Brass Moon, published by Curiosity Quills Press.

​Roscoe didn’t much mind his new job driving the hearse, except when his passengers were reluctant to leave.

Working for Hanrahan’s Funeral Parlor was Roscoe’s fifth job since leaving school, but it was the first job where no one gave him odd looks for talking to himself, if only because not many people heard him while he was driving. The worst job had been at the convenience shop near the Safeway grocery. A pair of old ladies had complained to the manager and he’d been sacked not quite two hours after starting. All he’d done was ask one lady to move her shopping cart off the chimney sweep’s toes. Was it his fault no one else could see the sweep? The poor kid had come in for a break from the wind, wind being a terrible trial for the ephemerals, as Roscoe liked to call them. They always moaned that the wind could blow them willy-nilly across the countryside, and Roscoe had to admit they had a legitimate gripe.

Before the convenience store, he had worked two full weeks stocking shelves at the Fleet Farm warehouse before one of the other workers told the boss that Roscoe was just too weird to work around.

“He talks to the empty air, like there’s someone right in front of him,” Bob complained. “He keeps stopping the forklift in the middle of the aisle.”

Roscoe smiled ruefully. All he had done was let the duck hunters cross. They had been out in the Armistice Day Storm years ago, and were still trying to warm up. They came in every time it rained, trailing bits of duckweed and drifting like smoke. Not that getting run over by the forklift hurt, they assured Roscoe, but it did make them feel sort of scattered.

What haunts your dreams?

A chill on a dark night?

A warm presence in the corner?

​Whether your ghosts are friendly or foul, there's something here to make you think twice. In these thirteen tales, you'll find ghost and spirits of every kind--from the eerie to the mundane, from the helpful to the truly evil.

​Eight different authors offer their own unique perspectives on how, and why, those who have gone before come back to visit from time to time, occasionally getting stuck. With simple black and white illustrations at the start of each story to set the mood, these stories will take you on a romp through worlds where hauntings come true. 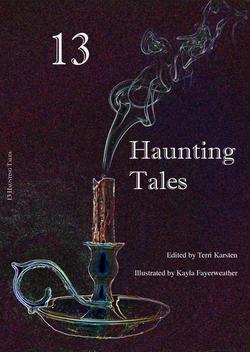